Sorry! You missed The Melvins at Vogue Theatre 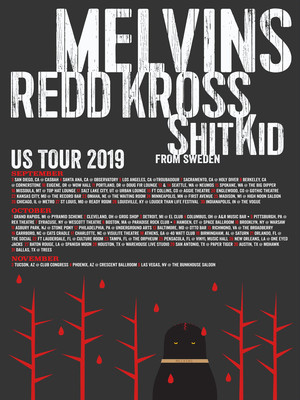 Since the early 80s Montesano, Washington's the Melvins have remained consistent in delivering hard/stoner rock music of the highest order.

Why See The Melvins?

Don't Miss Melvins and Friends on Their Late Summer Tour

Rock band the Melvins will embark on a country wide tour this September with support from alternative rockers Redd Kross and alternative Swedish artist ShitKid joining on select dates. Melvins formed in 1986 in Washington and released their debut album 'Gluey Porch Treatments' the following year. They have retained a cult-like loyal following ever since their inception.

Melvins latest album 'Pinkus Abortion Technician' was released last year and described as being "weird," "fun," "strange" and "heavy" as well as "very different to previous efforts" by Distorted Sound Mag. The magazine also pointed out the "sense of psychedelic noise that flows at the core of their sound."

John: “Best live band I have ever seem and I've seen a lot of them”

Sound good to you? Share this page on social media and let your friends know about The Melvins at Vogue Theatre.