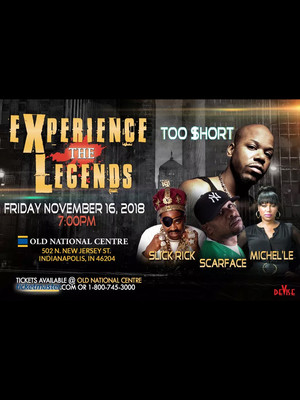 Four legends perform for one special night only!

For one special night only, four titans of hip hop and R&B share the Murat Theatre Stage, bringing their storied careers, considerable on stage charisma and sweet, soulful music to Indianapolis. One of the pioneers of West Coast hip hop, opening headliner Too Short goes down in history as one of the few performers to have worked with both 2Pac and The Notorious B.I.G during their feud era. Best known for hits like 'The Ghetto' and 'Blow The Whistle', he continues to shape the scene as a respected producer and collaborator.

Representing the streets of New York City, Slick Rick's Golden Age rap has been sampled over 600 times and features in the songs of Eminem, Beyonce, Snoop Dogg and Kanye West amongst others. Hailing from Houston, Texas, Scar Face put the city's hip hop scene on the map in the 80s and 90s as a member of the Geto Boys. LA-based contemporary vocalist Michel'le rounds off the bill with her full-bodied vocal style and years-ahead-of-her-time blend of old school and urban R&B.

Sound good to you? Share this page on social media and let your friends know about Experience The Legends - Too Short, Slick Rick, Scarface, Michelle at Murat Theatre.