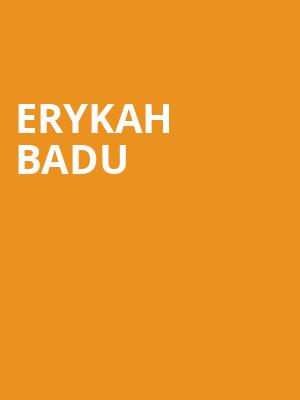 Her songs seem to have endless permutations of arrangements: instead of set melodies and structures to be rigidly adhered to, in Badu's hands they sound like living, breathing and growing entities.

THE FIRST LADY OF NEO-SOUL

Known as the Queen of Neo-soul, this influential soulstress's chart-topping singles have won Grammy Awards and hit the top of the charts since her first release 'Baduism' in 1997. Likened to Billie Holliday, her work takes elements from R&B, hip hop and jazz and has been credited with the rise of the neo-soul subgenre. Never one to shy from controversy, in 2010 her now iconic music video for Window Seat saw her walk through the streets of her native Dallas discarding her clothes until naked.

Make sure you don't miss a night of iconic music, and non-stop feel-good sounds.

Erykah badu s lyrics is food for my soul . FatbellyBella is creative,... more

Gale Foxx: “Like a fine wine, she only gets better ”

Erykah Badu is a poet of words and MUSIC! Ms Badu’s unique style is... more

Sound good to you? Share this page on social media and let your friends know about Erykah Badu at Indiana Farmers Coliseum.